Welcome to My Dad's War Souvenirs page! • See things he kept after the War • Canvas bag he got from a Gurka • German belt with buckle • Spoon • Length of rope • German bayonet with matched scabbard • Handmade Indian knife

My dad kept several souvenirs from his time in the War. He never spoke to me about them, so I can only speculate about how he came to have them.

The canvas bag, as you will see, was acquired at or near Aquila, Italy. He might well have had the spoon for a long time since it would have come in handy throughout his time as a POW.

Perhaps he got the handmade Indian knife and scabbard from the same Gurka from whom he got the canvas bag, but I have to wonder how dangerous it would have been for a POW to be caught with a weapon. He might have had the rope for a long time since it seems innocuous, that is, probably not dangerous to have as a POW.

It is my guess that he got the German belt and buckle as well as the German bayonet and matching scabbard just before he was liberated by the 13th Armored Division once the German Guards had run off or were captured.

He kept all of these items in a cellar in the basement of our home when I was a kid. This page presents pictures and descriptions of everything. 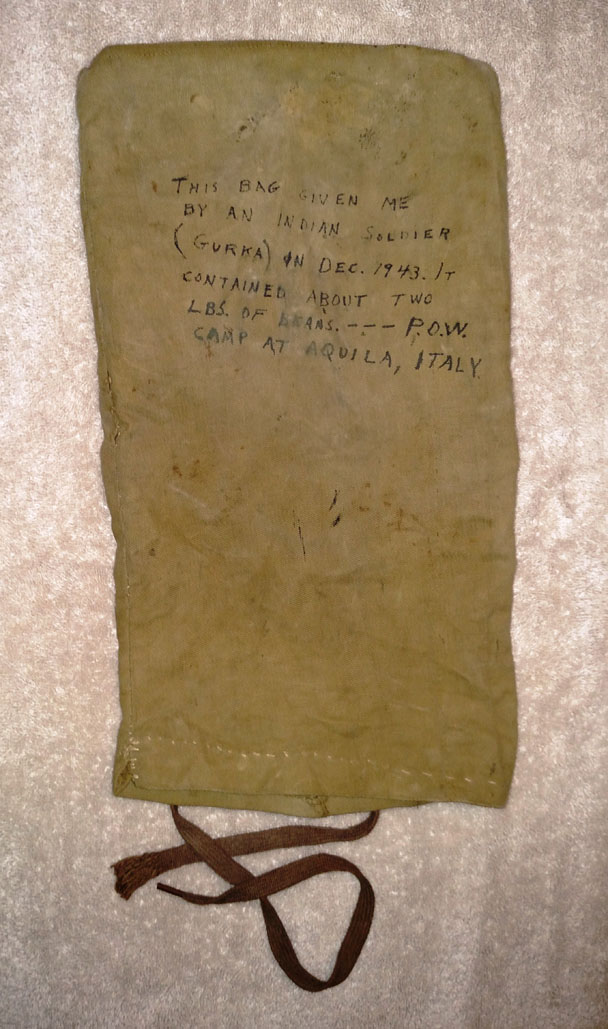 This canvas bag contained the belt with buckle, spoon, and rope that are shown below. My dad had written this information on the bag in India ink: "THIS BAG GIVEN ME BY AN INDIAN SOLDIER (GURKA) IN DEC. 1943. IT CONTAINED ABOUT TWO LBS. OF BEANS --- P.O.W. CAMP AT AQUILA, ITALY." The bag has a tie fashioned from a shoelace. 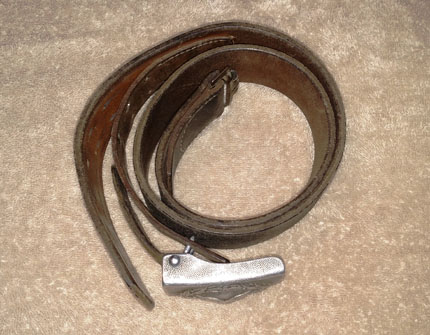 The belt and buckle appear to be German uniform equipment. 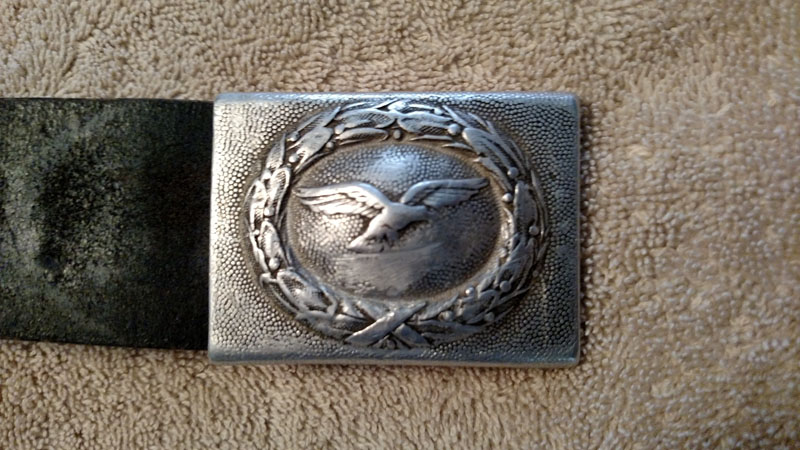 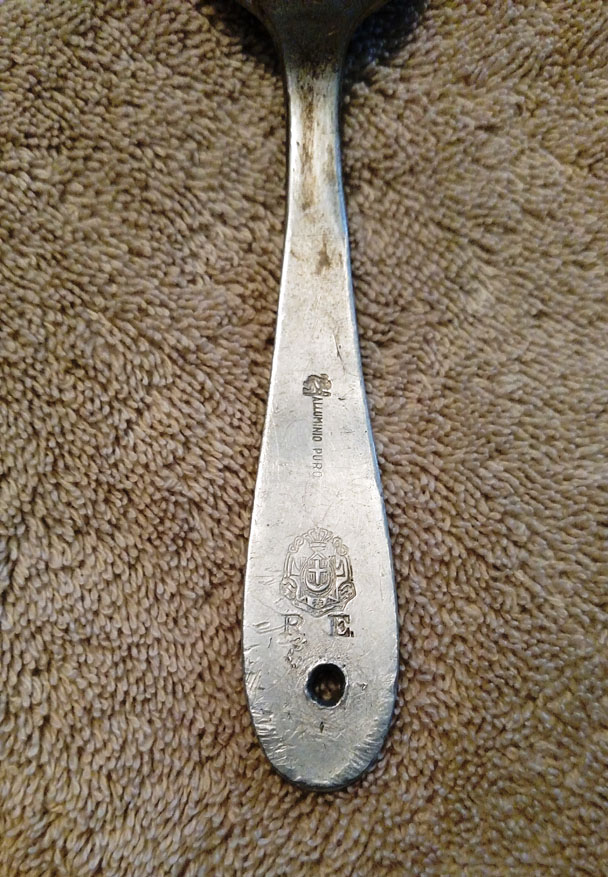 The spoon appears to be factory made but it has apparently had some crude rework done to the handle, including the handle’s end and the hole pierced through it. The back of the spoon contains a crest of some sort with a Christian cross in its center. Below the crest are the initials R E. Also stamped on the back of the handle in small letters are the Italian words ALLUMINIO PURO (pure aluminum.) 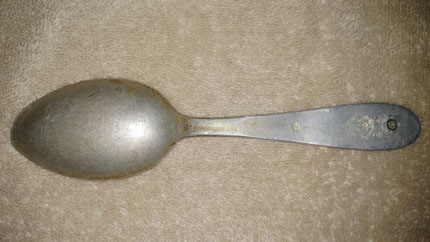 This well-worn length of rope is actually two pieces tied together with a total length of roughly 5 feet.

This German bayonet contains markings on the both the blade at the ricasso and the scabbard near the mouth. On one side are these markings:

The double-quotes are part of the markings. These markings are on the other side:

This is apparently a serial number—on both the bayonet and scabbard. So they are a matched set. The meaning of the “e” is unknown. The crs indicates it was an M1884/98 III bayonet made by Paul Weyersberg, Solingen, Germany 1934-1945, per http://worldbayonets.com/Misc__Pages/SG__84_98_III_Makers_Chart/SG_8498III_Bayonet_Makers_Table.pdf. It is only an assumption, then, that “40” means it was made in 1940.

The bayonet has a blade length of 10 inches and an overall length of 15-1/4 inches. 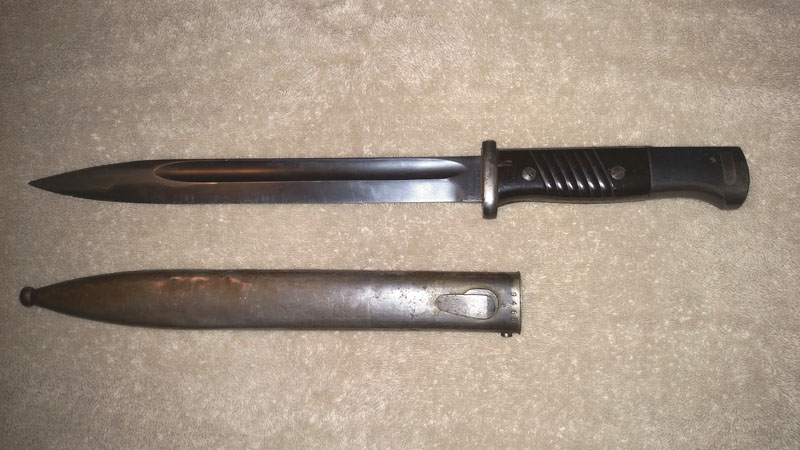 This handmade knife with handmade scabbard appears to be Indian. I once asked a Sikh to examine it. He believed it to be Indian and said the marks on the blade appear to be Indian but they are simply meaningless marks.

The scabbard comprises two pieces of wood held together by a wrap made from thin leather.

Both the knife and scabbard are now badly dilapidated. The dings on the edge of the blade were made by me. When as a kid I discovered this knife in a cellar in our basement, I tried to use it to hack the edge of the cellar’s door. The blade is obviously made with very soft metal. 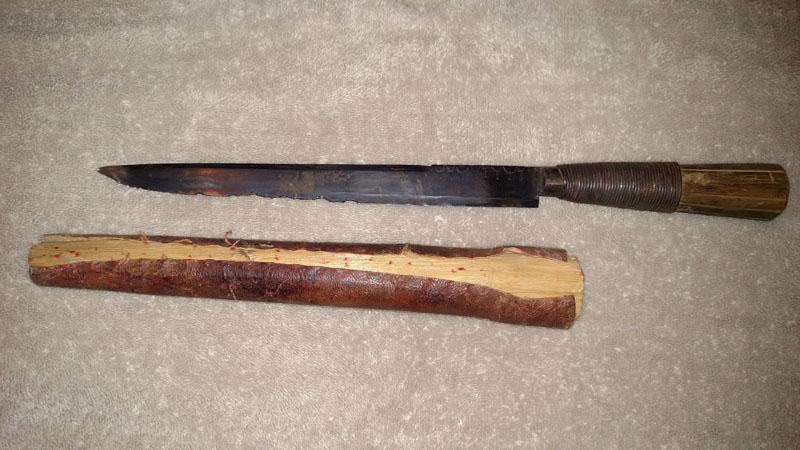