Welcome to the Off Base in Korat page! • See Sweetheart Alley and Bar Row • See other images in Korat • The Monument to Thao Suraneree • A gold store • Bamboo scaffolding • The train station • See these and other interesting sites in the pages that follow

During the early part of my time at Korat, we were on a work schedule of two 12-hour shifts per day, six days per week. This was a holdover from the Tet Offensive that began in Vietnam on 31 January 1968. This heavy schedule made visits to town a top priority. It also made going to town with friends difficult.

Because everyone worked six days per week but everyone's day off was different, it was sometimes hard to get to town with friends. When someone had the next day off, he'd always want to blow off steam in town that night. Those who wanted to go to town with him had to sacrifice some sleep in order to be on duty the next morning. But a lot of us did it because going to town was a top priority.

The pictures shown here and in the following pages are a mixture of a lot of different phases of life away from the air base. They are presented in no particular order. 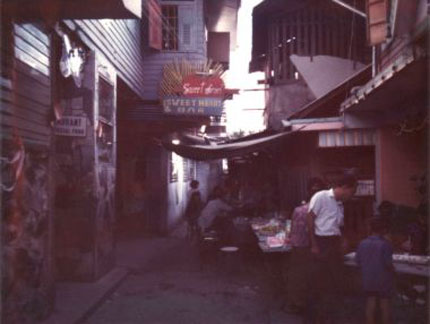 This very confined area was known as Nitnoi Alley, Sweetheart Alley, and Darling Alley. It was the busiest area in Korat at night

The Sweetheart bar can be seen at the left with a bar girl standing in the doorway. The Darling bar is the window at the top left. The term "nitnoi" means "small" or "tiny" in Thai. The "alley" is very small. Hence the name.

This is the infamous Bar Row. Particular bars cannot be seen in this view but there were several along this road.

The water seen in the road was constantly seeping to the surface until the road was paved. Incidentally, most of the paving work, and most of the construction work in general, is done by women! 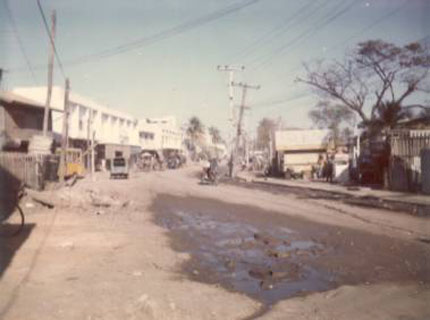 The Sripatana Hotel can be seen in the distance. It was located near Bar Row. The Sripatana was one of two rather modern, Western-style hotels in Korat. It was one of the few places in Korat where air-conditioning, decent food, and comfortable rooms could be found. When the next day was a day off from duty, it was a nice place to sleep while getting away from the oppressive heat of Thailand. 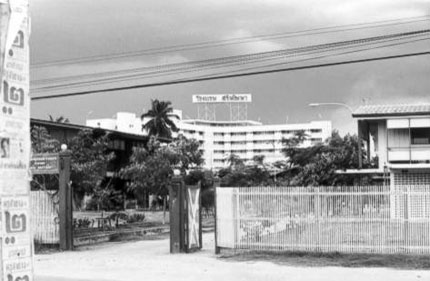 The large building at the right is the Chomsurang Hotel. The Chomsurang was somewhat nicer than the Sripatana and had better food, but it was a fair distance from Bar Row. Also, the Asia Massage can be identified by the sign above the sidewalk. Massage parlors were popular among the Americans. 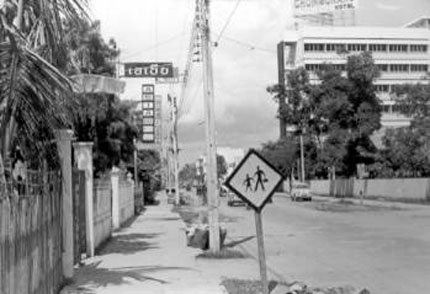 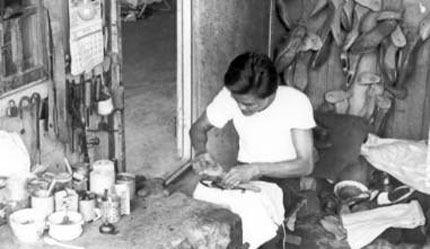 This is a cobbler that I stumbled on one day while wandering through town. I've always liked this photograph, so I've posted it here.

This is a long, lonesome, dark stretch of road at night. It runs from Bar Row in the distance to the downtown area behind the camera. The total distance is maybe 1 mile. Imagine walking this unlighted road alone at night! 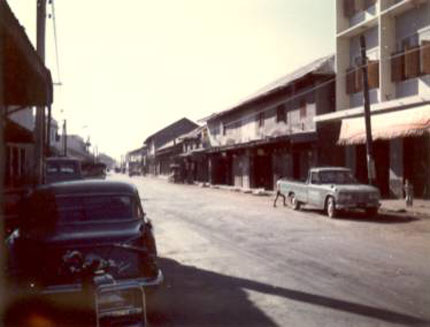 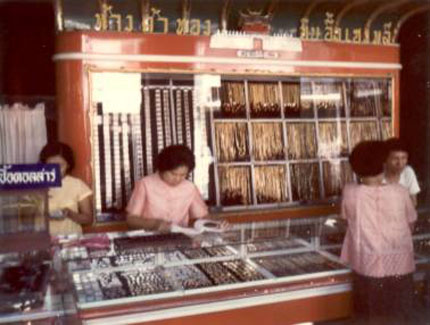 Gold stores were very common in Thailand. The gold jewelry was 24kt.

The prices were very realistic. For example, if you bought a gold necklace for $100, the store would buy it back later for $97.

This was a great place for steaks! The story I heard about it was that Sam was either a soldier or airman stationed in Thailand. He married a Thai woman. When he left the service, he stayed in Thailand and opened this restaurant. The prices were very reasonable. For example, the most expensive steak cost 70 baht ($3.50) and was so large that it spilled over the edges of the plate. The steaks were tender and tasted great. 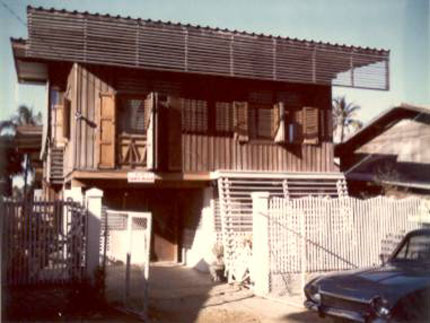 This amazingly crude assemblage of bamboo lashed together formed the standard scaffolding used in construction in Korat. As mentioned before, women seemed to do most of the work at construction sites. 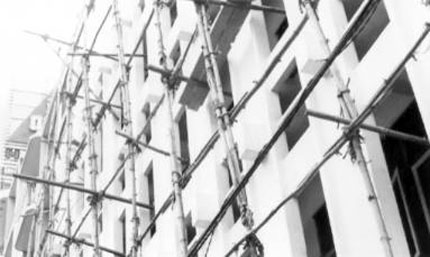 This statue of a woman is located in the square at the center of the downtown area. It was explained to me that Yahmoh is "like Buddha." It was never clear what this meant. However, the statue appeared to be treated with great reverence. Often robes and other clothing were placed on the figure. (I have since found out that the woman depicted by the statue was named Thao Suraneree though the people of Korat often call her Khun Ying Mo. Click the image for more info.) 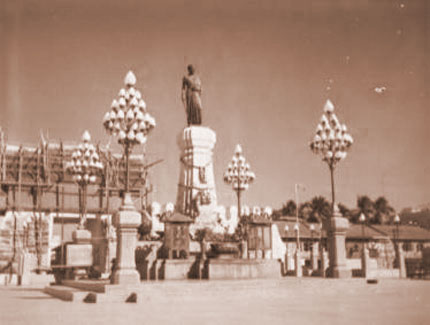 This steam engine was located in front of Korat's train station. There was a surprising number of steam engines in use as switching engines at the station. 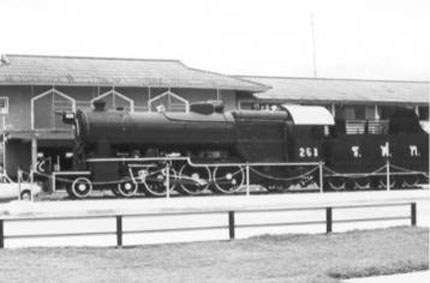 Water buffalo are grazing near an abandoned Buddhist wat (temple.) 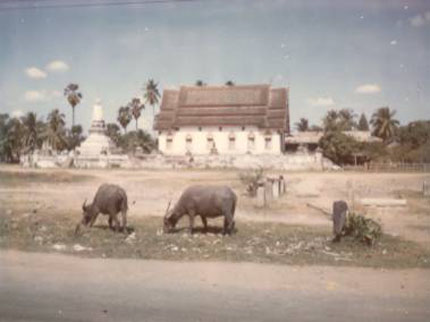