Welcome to the Spoken Account of William I. Craton page! THIS IS A GRIPPING ACCOUNT! • Find out why the crew was flying on the fatal day that they were not expected to be flying • Hear about the amazing events during the fighting and the plane's explosion • Hear what happened to them on the ground and as POWs • Hear about TWO of Mr. Craton's amazing escapes • Hear how they were liberated • Hear about what happened to Mr. Craton in his later life

This page contains an amazing spoken account by TSgt William I. Craton of the drama on my dad's B-17 (tail number 229486) during the fighting over Gerbini, Sicily on 5 July 1943, the day the plane was shot down. His story is compelling. Five crew members died. Five became prisoners of war.

Mr. Craton describes the terrifying events on the plane as well as his experiences later as a POW. His story is amazing.

As I researched my dad's experiences in WWII, I wrote letters to many people. All wrote back with either hand-written or type-written letters. No one among the veterans or families that I contacted—who were all of my father's generation—used a computer to compose their replies.

Mr. Craton, unlike all of the others, replied using an audio tape. So I sat in my living room for 45 minutes listening to a voice that my father had last heard 50 years earlier. It was an amazing experience. That spoken story is provided here.

Two written documents are available. The one on the left is the text of my original letter to Mr. Craton, dated 21 August 1994. Reading it will help to put his comments into context as he answers some of my questions.

The document on the right is a transcript of his audio tape which contains his reply. 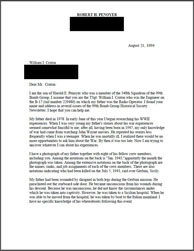 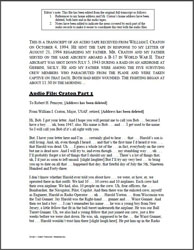 Note that Mr. Craton's home address and mine have been deleted from both documents as well as from the audio files.

Mr. Craton's audio tape has been broken into 10 files of roughly 5 minutes each. Each file is preceded by a description of what is discussed on that file. A transcript covering all of the files is available by clicking the image at the right, above. The transcript identifies the file associated with each portion of the text.

Mr. Craton was 71 years old when he made the recording.

Mr. Craton addresses me and introduces himself. He then explains the organization of the crew and how they ended up flying that day even though they were expecting one or two day's rest. He finishes the segment by explaining that their B-17 ended up in the lowest and most vulnerable element of the formation. They knew the target would be Gerbini, Sicily.

Mr. Craton explains why he chose to reply to my letter by using an audio tape. He explains that he will try to answer my questions [Click on the image on the left, above to read my questions] and somewhat apologetically says that there is a lot that he doesn't remember.

He says once again that he and the crew had to fly that day even though they were expecting a day or two of rest because the other crews were "being chicken, we called it." They knew the mission that day was to clear out fighters/aircraft for the invasion of Sicily. He talks about crossing the coast of Sicily with maybe 12 P-38 escorts.

Mr. Craton talks about being in a hospital in Naples and speaking with a German pilot whom he had shot down.

He says their B-17 was the first one to go down. He begins to give a sense of the intensity of the fighting and explains that the total number of fighters shot down by their crew was 11. Finally, Mr. Craton explains that the enemy fighters were so thick that he shot down one that he wasn't even aiming at.

The bombs were still in the bomb bay when the enemy fighters hit and knocked out 3 engines. The plane became separated from the group. The fighter that did the final damage shot up the bomb bay and set it on fire. With oxygen leaking into the bomb bay, the fire "burned bright and hot."

The plane blew up while those in front of the bomb bay were waiting to bail out. He explains what happened to some of the others. One crewman's parachute caught on the horizontal stabilizer and he was pulled to his death.

Mr. Craton was blown through the top of the plane when it blew up. He was shot by an enemy fighter while he parachuted to the ground.

When he finally reached the ground, Mr. Craton landed right in the middle of the flaming target area where he was captured and taken to a farmhouse. He describes the reaction to the ongoing attack of the people on the ground, and his failed attempt to escape along a trench.

He describes being in a hospital in Naples with a large dressing on his injured head. He lost his memory due to his head injuries. He talks about encountering the Tail Gunner, Harold Yorton, and his movement to a POW hospital near Munich, Germany. He explains that his memory returned after several months. He was moved eventually to a POW camp, 7A, near Munich.

Mr. Craton explains that there were a lot of escapes from that POW camp, with some making it back to France. He was told he was being moved to a place called Stalag 17B where escapes would not be possible.

Mr. Craton was moved on a cattle car, made for 8 horses or 40 people, "stand-up all the way." He tells of how he and two others managed to escape from their cattle car.

Mr. Craton explains how it was that he and other prisoner received guides, maps, and money to facilitate escapes. He was walking toward Italy one night when he fell off a cliff and broke his right leg and left ankle. And he was stuck there for 2 weeks.

He explains how he was able to survive those two weeks and the surprising way he was recaptured, eventually arriving at Stalag 17B. He encountered my dad there.

Mr. Craton tells of how my dad told him that the Italian POW camp where he had been held was abandoned by the guards when Italy surrendered, and my dad ended up at the farmhouse.

Mr. Craton tells an amazing story of one of his escapes that was depicted in the movie, Stalag 17, even though the event didn't happen there. He also mentions the successful escape of Sergeant Frank Grey who killed a guard and was spirited out of the camp and eventually returned to the States.

Mr. Craton describes the sleeping arrangements at Stalag 17B and the lack of heat.

He talks about all of the prisoners being moved out of Stalag 17B and marched west in 1945. Neither they nor the guards had food. They begged for food from the civilians. They ended up near the top of a bluff with a small town below on the other side of the river that was there.

Mr. Craton tells of seeing Americans coming and the guards leaving, with the prisoners left there by themselves. He describes watching American tanks entering the town. But because the tanks were receiving sniper fire, they left the town, turned, "and they leveled that little town." The next morning members of Patton's 3rd Army [13th Armored Division] arrived and liberated the prisoners.

He then describes briefly the means of getting away from there and, finally, home.

Mr. Craton addresses a comment that I made in my letter to him in which I told him, speaking as a kid who was born after the War, that all I knew about war was what I saw in John Wayne movies. So I thought some of my dad's stories were kind of fanciful. He corrected me and assured me that the stories were true.

Mr. Craton gives a vivid description of what conditions were like at the nose of the B-17 as they were preparing to bail out: "That nose looked like it had been going through a sieve ... somebody just took a saw and just sawed it to pieces."

He then describes life in North Africa and the route the crew took to get there.

He describes how the plane had been shot up several other times, making an emergency landing at Bizerte, Tunisia on one occasion.

Though there is one more audio segment after this one, this is the last one of any substance.

Mr. Craton laments not knowing more about my dad. He goes on to say he thought the world of that crew.

He talks about getting out of the Army Air Corps and re-enlisting in 1947 as a Staff Sergeant. [He had been a Technical Sergeant—5 stripes—when he got out, but came back in with one less stripe.] He talks about the other types of bombers on which he was a member of a crew.

Mr. Craton received a field promotion to 2nd Lieutenant while flying B-36s. He ended up back with the 99th, but this time it was a recon wing and he was with the 347th squadron instead of his old 348th [he mistakenly says 346th].

After 20 years in the Air Force, he retired [as a Major] and took a job with Lockheed. He eventually retired from Lockheed after 20 years.

He talks about being in a hospital in Sicily. I had asked him about a dog named Gerte that some of the crew had adopted but he didn't remember her.

Mr. Craton closes this audio segment by wishing me well. He also mentions his two sons and his daughter briefly.

The previous audio segment ended abruptly as the tape ran off onto the leader, reversed and began recording on Side 2. The intervening audio is lost forever. But this audio segment from Side 2 is the last of Mr. Craton's comments.

I will always be deeply grateful to Mr. Craton for this voice recording.