Welcome to the Some Bars and Other Sights in Korat page! See some of the bars on Bar Row • See an off-limits location • See what happened to one of the bars as Korat developed • Some typical teak housing • Western gas stations in town • A movie theater with one of its tickets • Boxing arena • Samlors

Some of the Bars in Korat

The bars in town were popular places at night. The airmen worked hard, they were very far from home, and they were young. When you work hard, you play hard. When you're young, you tend to indulge the less noble aspects of your nature. These bars and others provided outlets for the airmen.

The first two bars shown here were located along the infamous Bar Row. There were others along Bar Row that aren't shown. There were several others toward the Downtown area. Anyone who visited Korat at night in the 1968-1969 time frame will recognize these places. 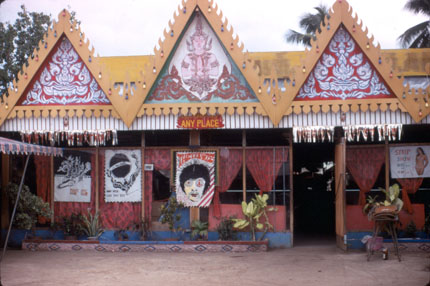 The Any Place Bar 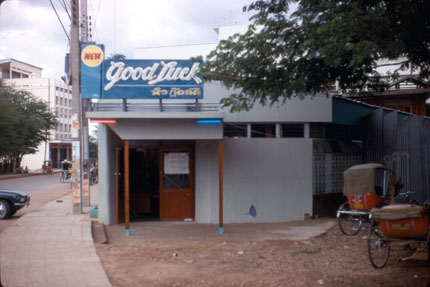 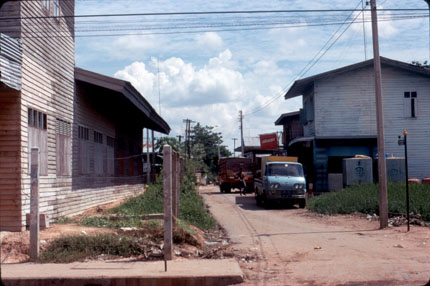 There were only two areas that I know of that were off limits. One was this place, called 10 Baht Alley. The other was 5 Baht Alley. My picture of 5 Baht Alley was damaged so I cannot present it here.

Another bar that was located on Bar Row but is not pictured here was the Starlight bar. To see what it looked like, and to see what happened to it, click here to link to a page on Bob Freitag's site.

A monk and an old man are seen here. A vendor's cart can also be seen. This is the place where the bus to the base stopped to pick up people who were returning from Bar Row. Bar Row began maybe 100 feet to the left of this picture. Incidentally, Buddhist men would often devote themselves to the life of a monk for one year when they were about 20 or 21 years old. That could be the circumstance for this monk.

These bungalows lie just up the road seen in the picture at left. (The same road is seen in both pictures.) Two of my friends lived in one of these bungalows with their teeloks (steady girls.) 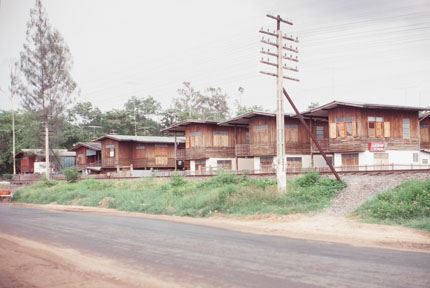 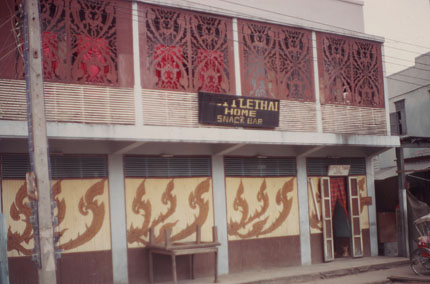 This bar was not on Bar Row.

Other Sights in Korat 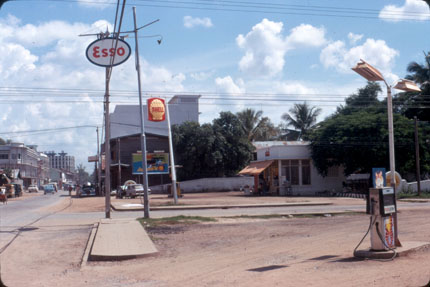 These two gas stations were located in the business district of Korat. Because cars were not owned by the average person in Thailand, these gas stations didn't get much business.

Part of the Business District

As Thailand's second largest city (pop. 50,000 in 1968/69) it's not surprising to find that Korat had business activities that were completely independent of the presence of large United States Air Force and Army bases. 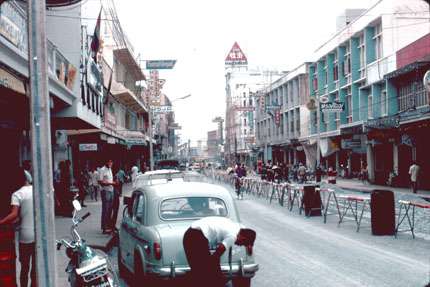 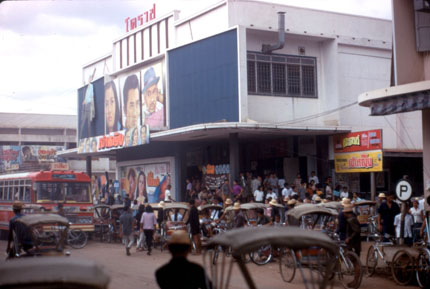 The movies were a popular pastime among the people of Korat. Advertising was not allowed on the government-controlled radio and TV so new movies were advertised via a truck carrying a large loudspeaker with a person in the truck touting the movie. The truck made its way slowly through various neighborhoods and business districts.

I watched movies at this theater on two different occasions. As I recall, each was an American "B" cowboy movie. They were badly dubbed in Thai and had subtitles in multiple languages. Sometimes movies had English subtitles, sometimes they didn't. 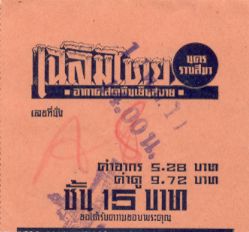 The ticket at the left was purchased at the theater shown above. The price of admission was 15 baht, about 75 cents. 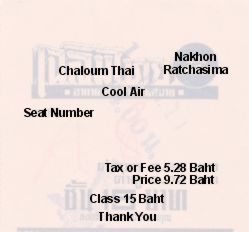 A translation of each part of the ticket is superimposed over the respective part. The translations were kindly provided by Rudy Paucker who was a member of the 1998th Comm Squadron, working in the Control Tower at Korat from September 1968 to April 1970. Rudy informs me that the stamp shows I bought the ticket at 2:00 pm on 1 November 1968. (The Thai year would have been 2511. 2511 - 543 (offset of Thai dating) = 1968.) The handwritten information indicates Seat A-8.

This bridge had no particular significance. I simply thought the sight was very pleasing and snapped several pictures of it. 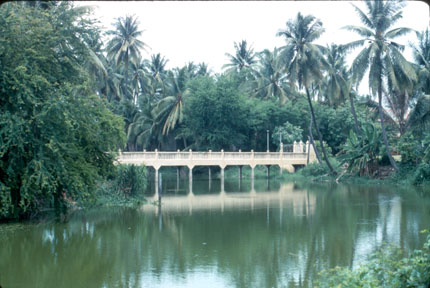 This was the only kickboxing (Muay Thai) arena in Korat. As far as I know, it was already permanently closed when I arrived in Korat. The arena was torn down during my time in Korat. 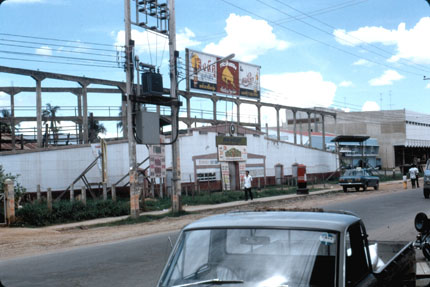 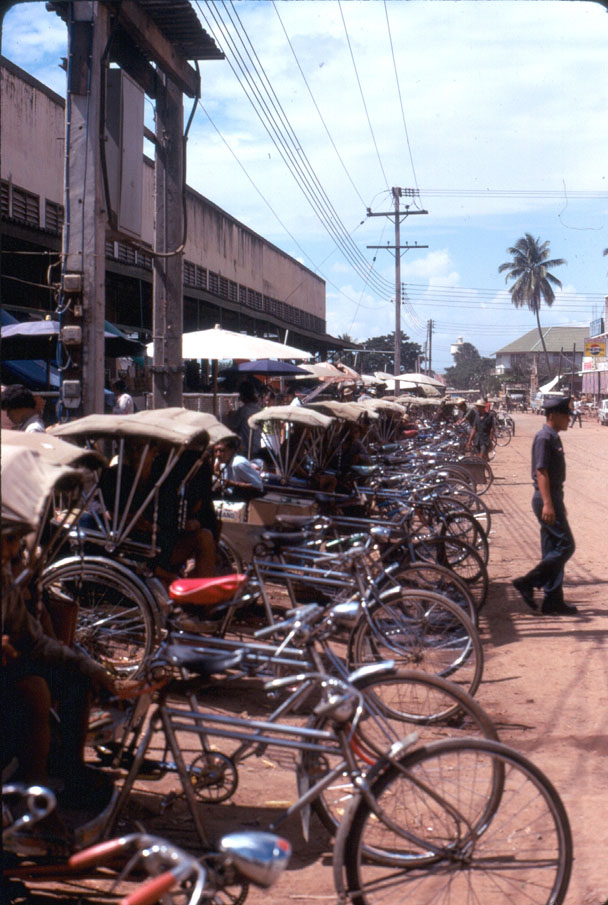 The term samlor (SAM-lore) refers to both the pedicabs seen here and the men who drove/peddled them. The ones pictured here are lined up outside an open-air marketplace.

Samlors were one of the primary forms of transportation around town. Usually, one would walk. But if you were tired, or the distance was farther than you'd like to walk on a hot day, the samlor was ideal. They were plentiful and inexpensive. A typical ride in a samlor might cost 5 or 10 baht (25 or 50 cents.)

The men who drove/peddled the samlors were typically impoverished guys who rented their unit for about $5 each day. So they had to have a lot of fares to merely make back their overhead. Life for them was tough. As a result, they frequently attempted to cheat or rob the airmen who used their services.

We were advised to always agree on a price before sitting in a samlor. Those who didn't faced a tough negotiation at their destination. Sometimes there were fights with the samlor driver. Sometimes several drivers would overpower the victim. At the very spot photographed here, two of my friends—one of whom was a good-size, tough-looking guy—were surrounded by many samlor drivers until one of them gave the driver his new watch! He was the butt of some jokes but we could all sympathize with his predicament.

This is a link to an excellent close-up picture of a samlor.

Massage parlors were popular among the airmen. 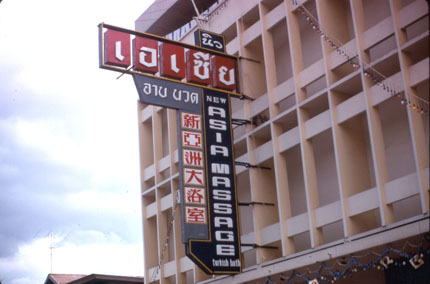